Tech enthusiasts tend to think of Nvidia for its PC components like the RTX 3000 line and gaming services like GeForce Now, but especially during the pandemic, these are far from the company’s only moneymakers. There’s also Nvidia’s enterprise level hardware, specifically its data centers. Nvidia’s data centers have been at the center of its story this year as the pandemic has forced businesses to move more of their operations into the cloud, but according to a new blog post the company posted earlier today, its data centers might also soon be bringing their calculations to the streets.

Earlier this week, Amazon’s Zoox, which develops driverless taxi, posted an in-depth breakdown of its latest robotaxi prototype. While it’s not publicly available quite yet, a testing fleet has been built and is currently on the streets on both closed courses and certain public roads. The Zoox robotaxi sets itself apart from competitors by focusing on a symmetrical design with no proper forward or backwards, which lets it give customers identical experiences regardless of where they sit and eliminates the need to reverse. It’s also got built-in touchscreens for communicating with the taxi and four-wheel steering to be able to get into tight spaces without parallel parking, but most importantly, it sports an Nvidia-powered machine-learning algorithm that incorporates cameras, radar, and lidar to constantly improve.

According to Nvidia, Zoox has been working directly with Nvidia to bring a level 5 autonomous vehicle- which is the highest tier of self-driving car and requires no human intervention- to streets since at least 2017. It’s also an alumnus of Nvidia Inception, which is the company’s incubator program for startups that focus on AI and data science.

So how does Zoox’s algorithm works? Essentially, while individual robotaxis will use their many sensors to drive safely in the moment, achieving a 360 degree field of view around all four corners of the vehicle, that data also gets sent back to an Nvidia data center equipped that helps beef up the company’s machine learning algorithm. That algorithm can then interpret that data to improve the driving AI, and beam updates out to its fleet of vehicles over-the-air every few weeks.

A human hand is also involved. 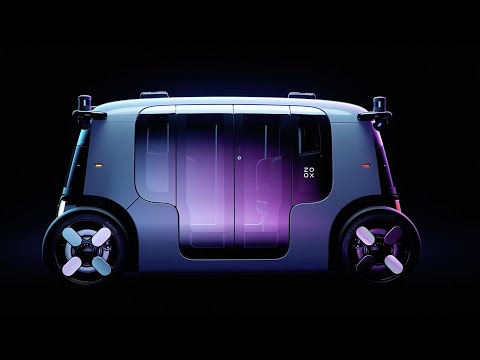 “As Zoox drives more, it gets smarter by collecting more data,” Zoox Senior Vice President of Software Ashu Rege explained in Zoox’s video breakdown. “As we encounter more incidents, we will process that data offline, and our engineers will obviously take a look at what situations it was able to handle well, what it wasn’t able to handle as well, and that gets folded into our development process where we would train our AI better.”

Zoox is currently testing and training its cars in San Francisco and Las Vegas, two dense cities that it’s hoping will help flesh out its AI’s ability to understand unusual edge cases one might encounter in driving. But we don’t know when it’s set to come out quite yet.

“The next step after today is to continue testing, both on private roads and public roads, and get to market in a dense urban environment,” Zoox CEO Aicha Evans explained.

For Nvidia’s part, its blog post calls Zoox “the only proven, high-performance solution for robotaxis.”

All of this information is still unfortunately fairly vague and mostly meant to sell customers on the concept rather than provide an in-depth guide to how Zoox’s AI learns or how it leverages Nvidia data centers. But it’s a good reminder that, regardless of how many consumer launches it bungles, Nvidia’s tendrils reach deep into the tech world.

How to Automatically Sync Save Data Between Nintendo Switches

Moving Cloud Save data between a primary Nintendo Switch and a secondary console can be a time-consuming annoyance.
Read more
Business

We spoke with experts who explained that 2021 will be a year when those obstacles — workers unaccustomed with cloud tools, applications that aren’t optimized for the cloud, and remote security — will be addressed.
Read more
Syndication

A beginner’s guide to data visualization with Python and Seaborn

Data visualization is a technique that allows data scientists to convert raw data into charts and plots that generate valuable insights.
Read more

Is Data Scientist a Valuable Asset in Business Management?

There are many roles a data scientist play and can add value to the business. Some of them are discussed below.
Read more
Business

We spoke with experts who explained that 2021 will be a year when those obstacles — workers unaccustomed with cloud tools, applications that aren’t optimized for the cloud, and remote security — will be addressed.
Read more
22-Year-Old Perry Hopstein

Dozens of factors can primarily affect a relationship, and age is inevitably one of them.
Read more

Why Marie From The Bourne Movies Looks So Familiar

German actress Franka Potente arrived on the global cinematic scene in 1998, when she starred as the titular Lola in Run Lola Run (also known by its German name, Lola Rennt).
Read more
Gaming

The Drug Mission That Didn’t Make It Into GTA 5

It starts off with the player ambushing a drug deal and killing everyone involved.
Read more
looper

Will We Ever Get A Jason Bourne 6?

Although, surprisingly, he did say he'd be interested in seeing another sequel, telling the outlet that he'd be "first in line.
Read more
Gaming

As it turns out, Taylor and Jack have more in common than their voice. Taylor also had a rebellious streak.
Read more
looper

Just don't expect a gritty reimagining of the hero, though, as the series is aimed at kids aged six to 11.
Read more
Load more
- Advertisement -